Last week we did a day trip to Pala-U Waterfall, about 2 hours scooter drive away from Hua Hin, but by car it’ll probably only take just over an hour. We set off about 10 o’clock in the morning and did the beautiful drive through the Kaeng Krachan National Park. Little did we know that we were driving through a nature reserve with wild elephants and bears.

The park is one of the largest in Thailand and sits right next to the Burmese border. Pala-U Waterfall is only a tiny part of this beautiful park. You can camp just at the entrance of the park, we met a very nice Thai man who loved the fact we were from Manchester and apologised to us for the fact we had to pay more to get into the park than a Thai citizen which we thought was very nice, even though it’s out of his hands. The price for us was both, with the scooter was about 600 baht and for a Thai resident was under 100 baht. But if you pay at this national park and decide to go to another one afterwards you don’t have to pay again. 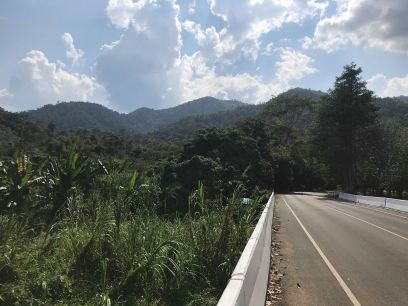 There’s 5 different levels that you can get to at the waterfall, the first 3 are for beginners and the last 2 are for hikers, apparently. I was a little put off when I read this about the waterfall before we went because I am definitely not a hiker, and don’t see myself as being that fit so we were only planning on doing the first 3 levels. At the 3rd level there’s a really nice pool that you can swim in, with loads of carp. At the entrance to the waterfalls you can also buy fish food I think! We made it to the 3rd level quite quickly so decided to try our luck at level 4 and 5. And they are harder than the others but I wouldn’t say they are only for hikers. There’s a lot less people on the last two levels, in fact we didn’t see anybody up there. There’s a lot more climbing on rocks and things though so if you’re not confident in that I’d stay at level 3.

It was gorgeous at the top though and there was a pool but we didn’t really want to go in. The water was freezing too! It’s a fascinating place, especially because it’s still inside a national park so you can see all sorts of animals. We didn’t come across any but apparently you can sometimes see monkeys and lots of bird species. But don’t stray from the path because there are dangerous animals in the park like leopards.

We spent a few hours there, wandering around and it was a really nice day out. One thing I would say though is make sure you have bug spray on because there are HUNDREDS of mossies and flies, I got bitten 13 times! If you’re susceptible to bites, or allergic like me, I would suggest wearing long sleeves and pants, even though it’s not ideal in this weather.

We had a really good day out there, although with a car you could probably get it done it half a day. Hopefully we’ll be able to go again whilst we’re here!

Is there anywhere is Hua Hin that you’ve been before and would recommend? I’d love to know!

(All photos taken by Skye)

♥️ Happy Valentines Day everyone! ♥️ I hope everyone’s had a great valentines, galentines, palentines and all the other alentines Day!! . . I would like to get a bit soppy by talking about this boy here. He came crashing into the chaos that was my life when I was least expecting it. He came on board and made me laugh when I was down. He put the pieces of me back together and made me feel myself again. He’s my biggest fan and supports me in every way possible! I love you princess 💕💕 . . I can’t wait to travel the world with you! ✈️🌎 . . #travelcoupleinspiration #valentinesday #lovehim #valentinesday2020 #traveltogether #travelcouplecommunity #coupletravelgoals #creativetravelcouples #coupletraveldiary #inspiredtravelcouples #dirtybootstravel #appreciationpost #travellingtheworld #traveladdict #travelphotography #travelinbetween #couplephotography #travelcoupleinspo #thetraveltribe
Swinging through the week 💃🏻 Little throwback to our trip to Penrith! On the way we stopped off at Lowther Castle & Gardens in the freezing cold! ❄️ But I’m glad we did! We got pretty much the whole place to ourselves and managed to bag some cool pictures! The castle is one of my favourite things I’ve seen so far this year! . I’d better get used to taking pictures in the freezing cold because we’re off to Edinburgh next week for a few days and I’ve heard it’s even nippier than here! . If anyone has any Edinburgh recommendations I’d love to hear them! . #traveltogether #wandertheworld #thetraveltribe #dirtybootstravel #forbesttravelguide #iamtraveler #abmtravelbug #flashesofdelight #lowthercastle #discoverunder1k #travelengland #uktravel #travellinguk #penrith #lakedistrict #travelblogger #travelinbetween #castlephotography #digitalnomadlife #thetravellerspage #travelagent #sheisnotlost #travelphotography
Together is our favourite place to be ♥️ . We attempted the cute couple kissing shot! It’s definitely harder than it looks and we got lots of bloopers and fails in between! I think we need more practice in couple shoots but practice makes perfect! . . I also just published one of my favourite blog posts I’ve ever written! Check out the link in my bio for 7 Romantic Cities in Europe for Valentine’s Day! It took me a long time to find flights, hotels and things to do for you guys so take a look! ♥️ . . . . . . #tattonpark #tattonparkgardens #travelcoupleinspiration #globalwanderer #exploretogether #travelcouplevibes #travelcoupleinspo #coupletravelgoals #discoverunder1k #travelengland #flashesofdelight #wandertheworld #coupletraveller #travellustcouples #valentinesdayblog #europeancities #romanticcity #dirtybootstravel #travelblogger #couplephotography #travelinbetween #thetravellerspage
💫Fresh Air💫 I definitely need to start doing more walks if they end up like this! . We took an impromptu trip to Tatton Park this week and were treated to views like this! The whole place was empty (probably because it was freezing!) but that didn’t deter us! We wandered around the cute farm shop, strolled through woods and found ourselves some fallow deer! . It’s so nice to walk in the fresh air with the one you love, chatting and laughing. It’s becoming my favourite thing to do and it needs to be done a lot more this year! . . Where is your favourite place to have a walk? . . Also can we talk about this amazing picture that @haydendaintyxo captured 😍😍 . . #flashesofdelight #abmtravelbug #iamtraveler #forbestravelguide #travelengland #discoverunder1k #uktravel #travelblogger #travelinbetween #thetravellerspage #dirtybootstravel #journeysofgirls #girlsdreamtravel #tatton #tattonpark #tattonparkgardens #abm #thetraveltribe #exploretogether #globalwanderer #wandertheworld #travelblogger #wordpressblogger
✨ Amsterdam ✨ My last blog post is up about our day spent in Amsterdam! Check out the link in my bio! . . I can’t wait to go back to Amsterdam, we definitely didn’t see enough things whilst we were there! For everyone who’s been before, where’s your favourite place in Amsterdam? . . We’ve just booked Edinburgh too so I need recommendations on what to do! . . #amsterdam #amsterdam🇳🇱 #amsterdamcanals #amsterdam_streets #netherlands #amsterdamphotography #amsterdamatnight #exploringeurope #exploringamsterdam #travellingeurope #dirtybootstravel #travelinbetween #discover_vacations #thetravellerspage #digitalnomadlifestyle #ambtravelbug #forbesttravelguide #travelguides #flashesofdelights #travelblog #traveltheglobe #traveltherenext #travelbucketlist
I think I have a castle obsession? 🏰 There’s people still living in this castle in Durbuy which I think is insane! Imagine living in a castle?! 😍 . . This is one of my favourite shots I’ve ever taken of Durbuy Castle in Belgium! I usually post photos with myself in them but I’d like to also concentrate on my photography! How do people feel about pictures with people in and pictures without? Do you think one is more interesting than the other or are your eyes drawn to one or the other? Please let me know in the comments! . . There’s also a new blog post up about my trip I took a few months ago to Belgium to visit a friend! Check it out in my bio 🏰 . . #belgium🇧🇪 #durbuy #durbuybelgium #exploringbelgium #exploringeurope #belgiumtravel #europetravel #belgiumwaffles #castlephotography #castlemypassion #castles_aroundtheworld #castlesofinstagram #castlesoftheworld #travelblog #digitalnomadlifestyle #travelinbetween #dirtybootstravel #forbesttravelguide #belgiumtravelguide #discover_vacations #thetravellerspage #wandermore #travellingeurope #castles_oftheworld
%d bloggers like this: