Last month we took a trip to Sticky Waterfall/Bua Tong Waterfall. Ever since I moved to Chiang Mai I’ve wanted to visit Sticky Waterfall and I found Wat Ban Den on the maps as I planned. So I thought we’d do them both in the same day!

We drove from Hang Dong in Chiang Mai to Wat Ban Den and it took us about 1 hour 30 minutes. It’s a decent drive which is mostly a highway and the views are pretty. I knew there were quite a few temples on the same plot of land but it was actually huge! 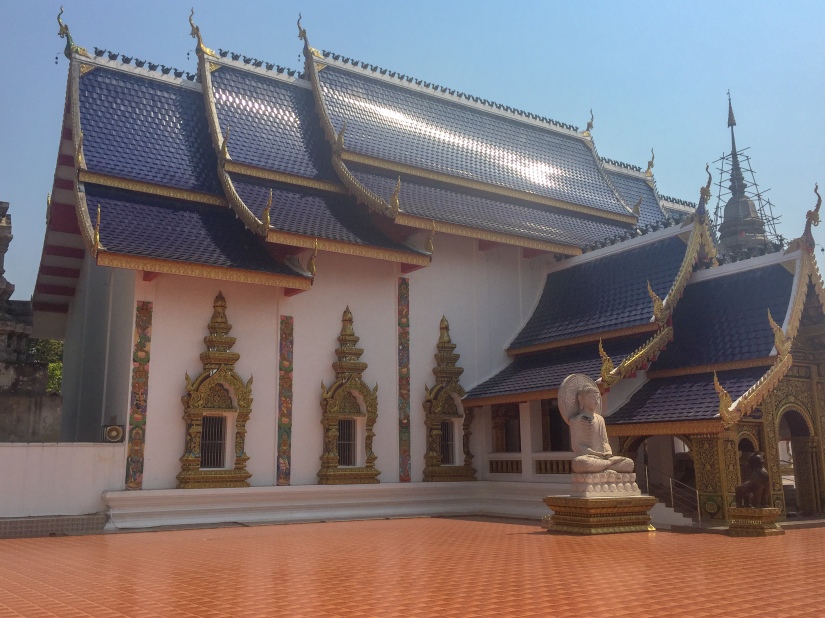 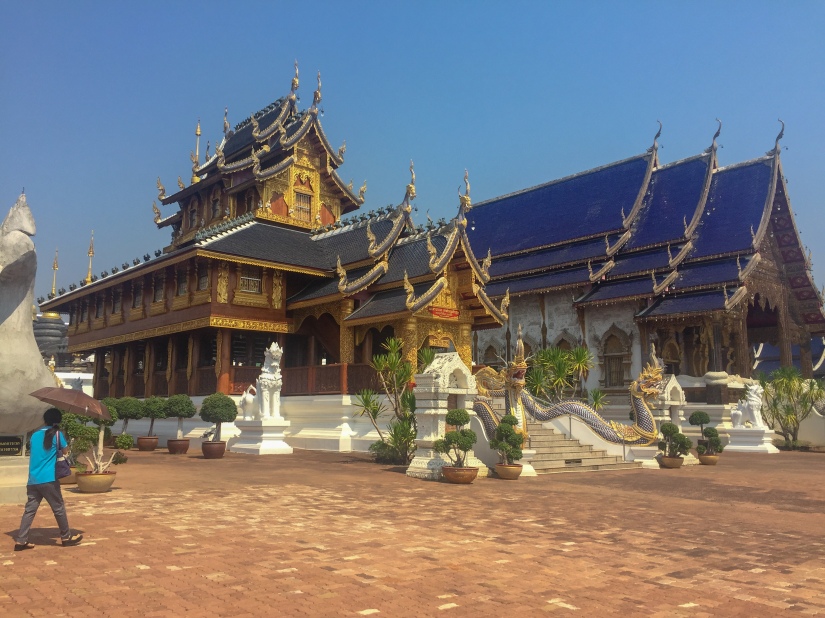 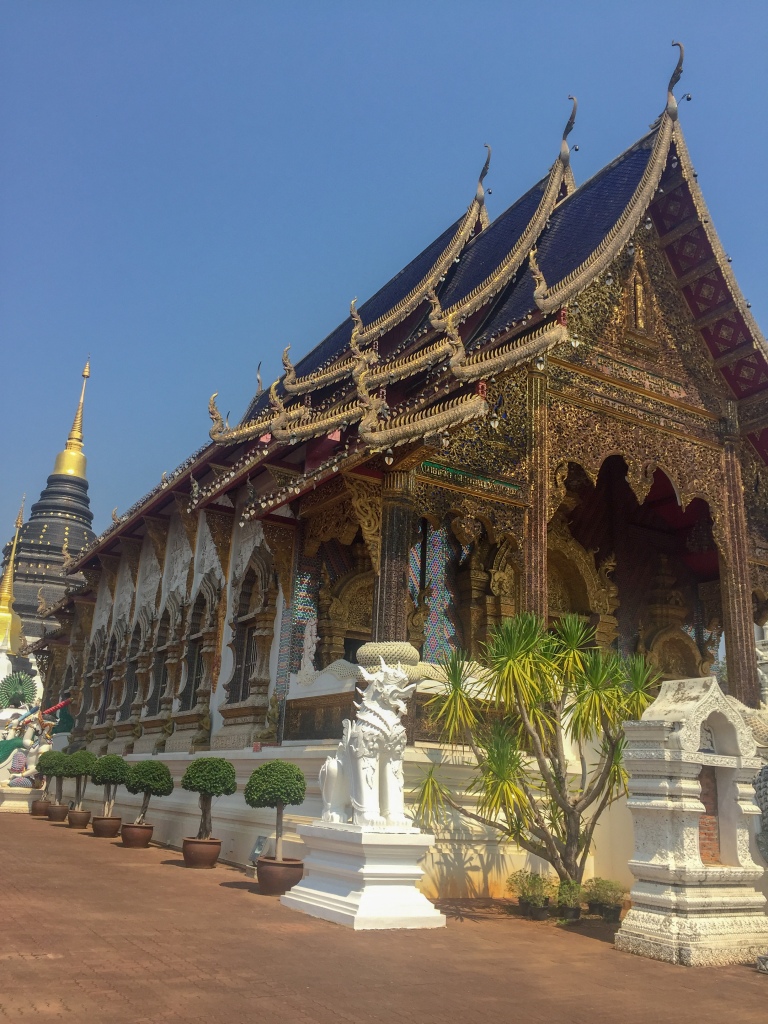 We got there pretty early but there was already a lot of tour buses and quite a lot of people. But because the complex was so big, it wasn’t very crowded. We wandered around each temple, each of them completely different. Some of them have the traditional Thai temple style but a lot of them have different styles. There were also a lot of statues of some amazing creatures that I loved!

My favourite one was the black chedis/pagodas. Each one of the 12 chedis represents the Zodiac Animal Signs. The belief is that when you die, your spirit will stay in the chedi of your Zodiac animal. They were beautifully created but unfortunately you couldn’t go right up to them as they were fenced off. 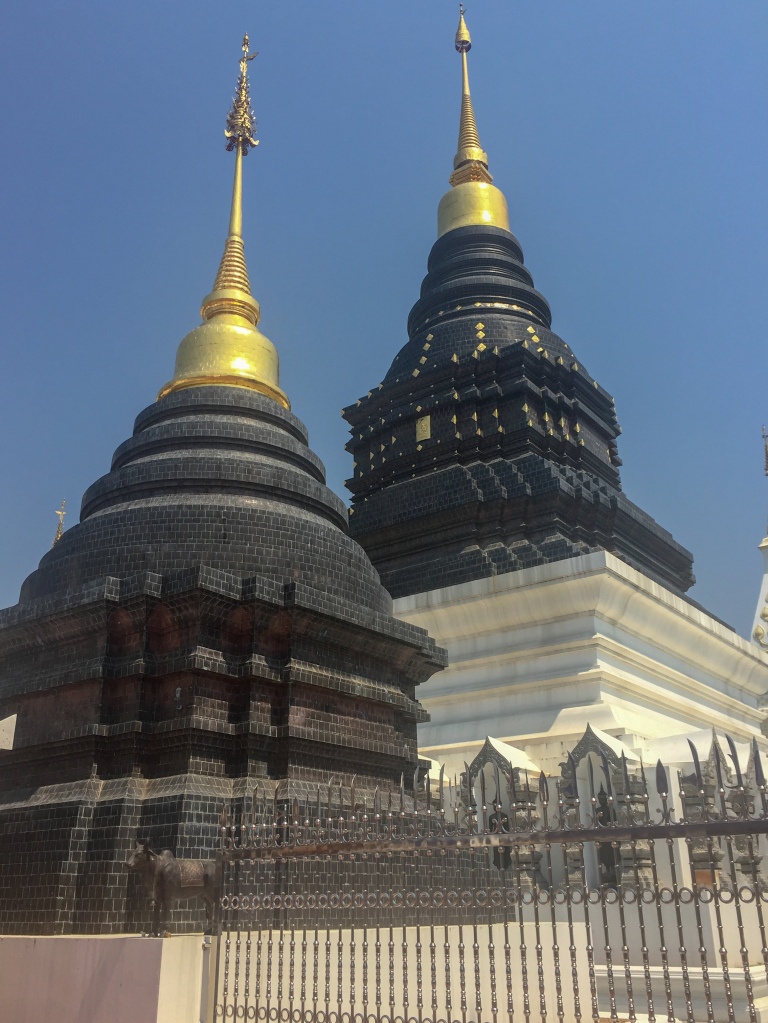 Everywhere in the complex was immaculate and tidy which was great. We didn’t stay for too long because the heat was way too much, especially in our temple-going attire so we took a few pictures and left. I would definitely come back though when it’s a bit cooler to properly look at them all!

Next we made it to Sticky Waterfalls. I’d heard so much about this place and done quite a bit of research too. Sticky Waterfalls get their name because the limestone creates a friction that makes it easy to walk up. There’s 5 levels so we walked all the way down the stairs to the bottom and, using the ropes, we climbed up. The first section was a bit slippery and you just have to make sure your footing is right. Stay away from the dark green surfaces and keep to the white and pale grey surfaces as they’re the ‘stickiest’. 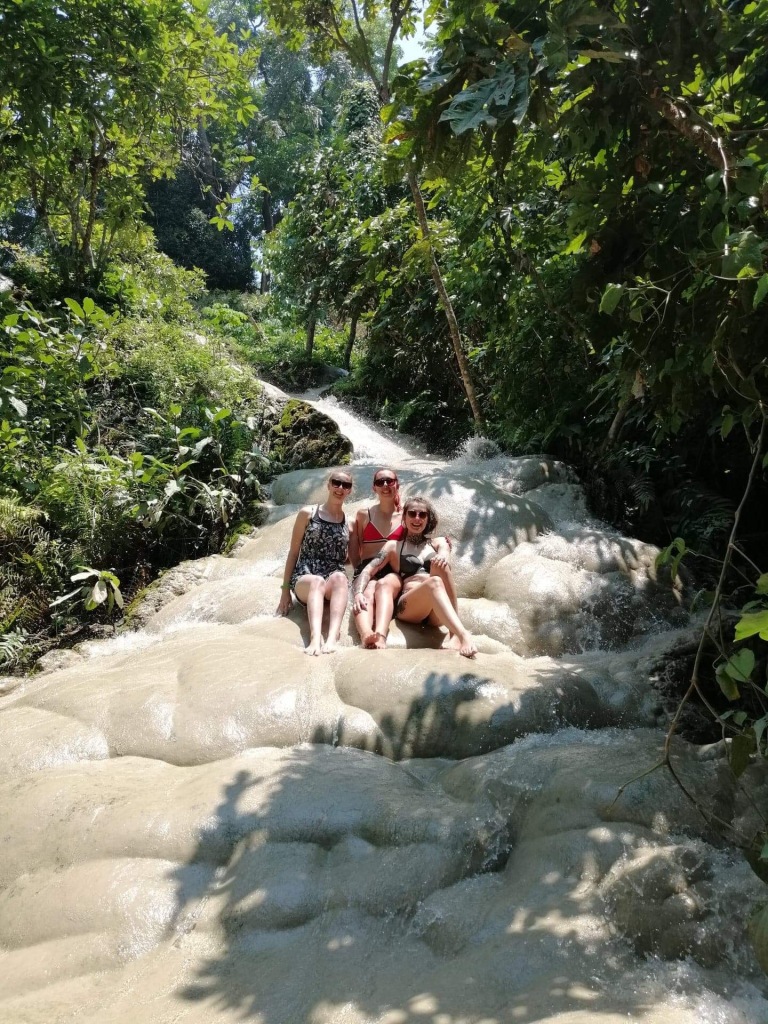 We chilled for a bit after that in the natural pools as the water was so refreshing on a hot day. It was quite busy when we went and you had to sometimes manoeuvre around people. We then climbed the second part and this was so much easier! You could literally walk straight up most of it without the use of a rope. It got quite tricky near the top but you just have to be so careful and keep a hold of the rope. The view at the top of the last part was beautiful too!

After this we got some snacks and pot noodles from the very cheap shop and then ate some food at the picnic area at the top.

Lastly we went on a short walk to a shrine next to a pool of crystal clear water. I’ve never seen water quite that colour before! It was incredible. It was good luck to splash yourself with some of the water so we used one of the small buckets to do that.

We then drove back home which took us nearly 2 hours. But I had a really great day out and ticked something off my bucketlist that I’d wanted to do for a long time!

I recommend Wat Ban Den if you’re heading up that way as a quick stop off. The temples are beautiful but there’s that many in Chiang Mai I don’t think I’d drive all the way just to see these.

I would recommend driving all the way up here for the waterfalls though! We had a lot of fun but it is a lot more slippy than I thought it was going to be. You just have to be careful the whole time and don’t do anything stupid and you’ll be fine!

I hope you like this blog post! Don’t forget to check out my latest one all about the cutest cafe in Chiang Mai! Cloud9 Cafe, Chiang Mai 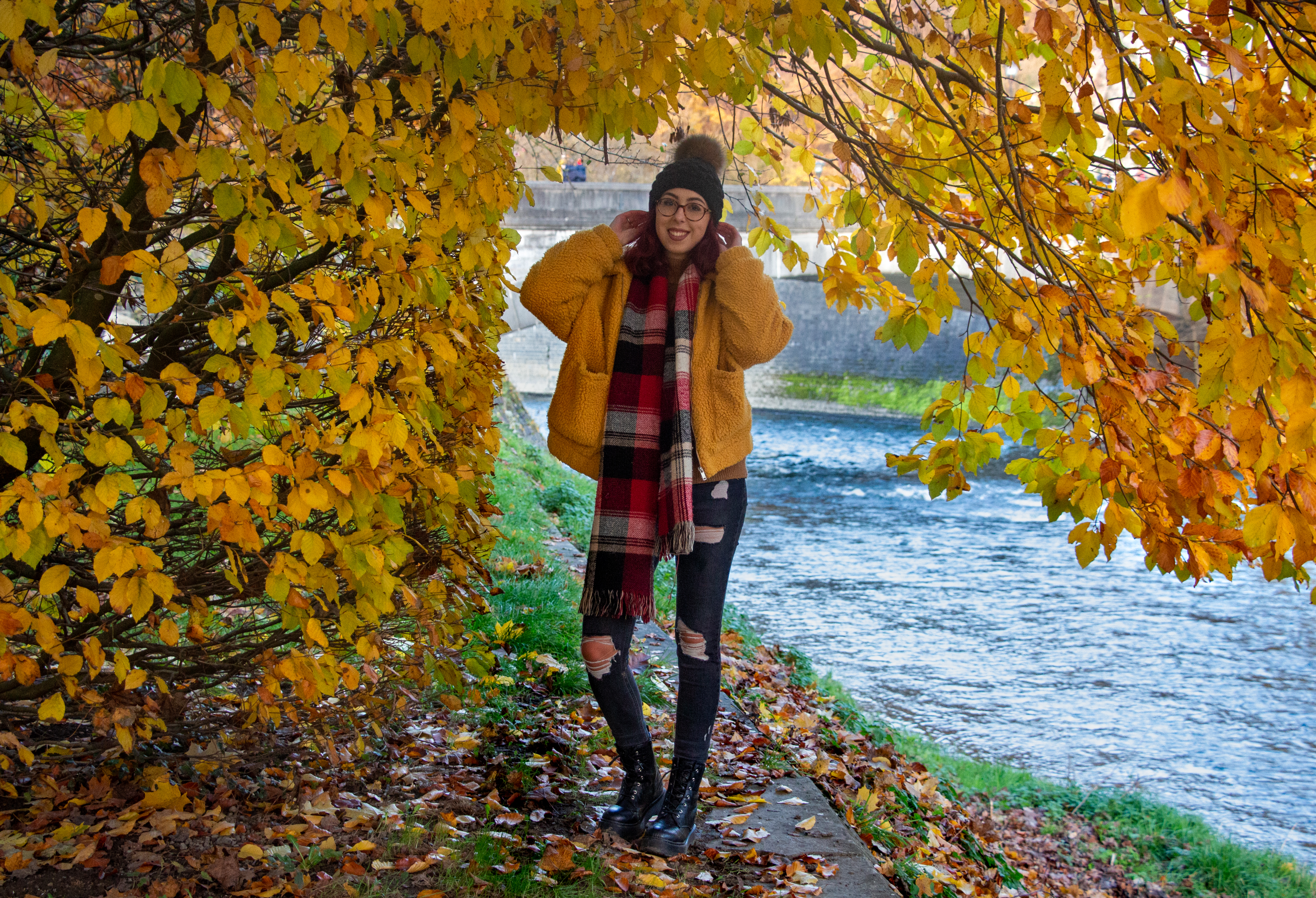 ✨ Wanderlust ✨ I’ve been getting major itchy feet lately, I can’t wait to get on my next adventure! . . Something I never actually talk about on my blog and socials is my jobs and how I earn money! I didn’t think people were that interested but I’ve been giving advice to a few travellers recently so I thought I’d write a blog post about it! (Link in bio!) . . I have two different jobs, one is an Independent Travel Agent (hit me up if you want any holidays!) and I also teach English online! With my job teaching online I literally have the flexibility to teach anywhere in the world as long as I have a good internet connection! I’ve taught English from my laptop at a 5* resort in Thailand and from my friends house in Belgium! It gives me the chance to earn money whilst I’m travelling too meaning I could travel the world full-time! . . I know this job isn’t for everyone but it’s been a blessing for me because it’s given me amazing opportunities to travel whilst not losing out on any money! . . If you want any more info about how you can teach online, click the link in my bio where I explain it all! 📚 . . 📸- @haydendaintyxo #travelteacher #teacher #teachersofinstagram #teacherblog #eslteacher #eslteachers #onlineteacher #onlineteachers #teachandtravel #onlinejob #digitalnomad #travelandteach #eslonlineteacher #onlineclassroom #workandtravel #flashesofdelight #discoverunder1k #wandertheworld #exploretheworld #discovertheworld #dirtybootstravel #travelinbetween
♥️ Happy Valentines Day everyone! ♥️ I hope everyone’s had a great valentines, galentines, palentines and all the other alentines Day!! . . I would like to get a bit soppy by talking about this boy here. He came crashing into the chaos that was my life when I was least expecting it. He came on board and made me laugh when I was down. He put the pieces of me back together and made me feel myself again. He’s my biggest fan and supports me in every way possible! I love you princess 💕💕 . . I can’t wait to travel the world with you! ✈️🌎 . . #travelcoupleinspiration #valentinesday #lovehim #valentinesday2020 #traveltogether #travelcouplecommunity #coupletravelgoals #creativetravelcouples #coupletraveldiary #inspiredtravelcouples #dirtybootstravel #appreciationpost #travellingtheworld #traveladdict #travelphotography #travelinbetween #couplephotography #travelcoupleinspo #thetraveltribe
Swinging through the week 💃🏻 Little throwback to our trip to Penrith! On the way we stopped off at Lowther Castle & Gardens in the freezing cold! ❄️ But I’m glad we did! We got pretty much the whole place to ourselves and managed to bag some cool pictures! The castle is one of my favourite things I’ve seen so far this year! . I’d better get used to taking pictures in the freezing cold because we’re off to Edinburgh next week for a few days and I’ve heard it’s even nippier than here! . If anyone has any Edinburgh recommendations I’d love to hear them! . #traveltogether #wandertheworld #thetraveltribe #dirtybootstravel #forbesttravelguide #iamtraveler #abmtravelbug #flashesofdelight #lowthercastle #discoverunder1k #travelengland #uktravel #travellinguk #penrith #lakedistrict #travelblogger #travelinbetween #castlephotography #digitalnomadlife #thetravellerspage #travelagent #sheisnotlost #travelphotography
Together is our favourite place to be ♥️ . We attempted the cute couple kissing shot! It’s definitely harder than it looks and we got lots of bloopers and fails in between! I think we need more practice in couple shoots but practice makes perfect! . . I also just published one of my favourite blog posts I’ve ever written! Check out the link in my bio for 7 Romantic Cities in Europe for Valentine’s Day! It took me a long time to find flights, hotels and things to do for you guys so take a look! ♥️ . . . . . . #tattonpark #tattonparkgardens #travelcoupleinspiration #globalwanderer #exploretogether #travelcouplevibes #travelcoupleinspo #coupletravelgoals #discoverunder1k #travelengland #flashesofdelight #wandertheworld #coupletraveller #travellustcouples #valentinesdayblog #europeancities #romanticcity #dirtybootstravel #travelblogger #couplephotography #travelinbetween #thetravellerspage
💫Fresh Air💫 I definitely need to start doing more walks if they end up like this! . We took an impromptu trip to Tatton Park this week and were treated to views like this! The whole place was empty (probably because it was freezing!) but that didn’t deter us! We wandered around the cute farm shop, strolled through woods and found ourselves some fallow deer! . It’s so nice to walk in the fresh air with the one you love, chatting and laughing. It’s becoming my favourite thing to do and it needs to be done a lot more this year! . . Where is your favourite place to have a walk? . . Also can we talk about this amazing picture that @haydendaintyxo captured 😍😍 . . #flashesofdelight #abmtravelbug #iamtraveler #forbestravelguide #travelengland #discoverunder1k #uktravel #travelblogger #travelinbetween #thetravellerspage #dirtybootstravel #journeysofgirls #girlsdreamtravel #tatton #tattonpark #tattonparkgardens #abm #thetraveltribe #exploretogether #globalwanderer #wandertheworld #travelblogger #wordpressblogger
✨ Amsterdam ✨ My last blog post is up about our day spent in Amsterdam! Check out the link in my bio! . . I can’t wait to go back to Amsterdam, we definitely didn’t see enough things whilst we were there! For everyone who’s been before, where’s your favourite place in Amsterdam? . . We’ve just booked Edinburgh too so I need recommendations on what to do! . . #amsterdam #amsterdam🇳🇱 #amsterdamcanals #amsterdam_streets #netherlands #amsterdamphotography #amsterdamatnight #exploringeurope #exploringamsterdam #travellingeurope #dirtybootstravel #travelinbetween #discover_vacations #thetravellerspage #digitalnomadlifestyle #ambtravelbug #forbesttravelguide #travelguides #flashesofdelights #travelblog #traveltheglobe #traveltherenext #travelbucketlist
%d bloggers like this: