Last November I went on a little break to visit my friend in Belgium for a week! We got up to a lot of stuff and if you want to read all about it, check out my blog post here – Short escape to Belgium.

We drove from Sint-Truiden, where my friend lives, to Amsterdam which took about 3 hours. We parked our car near to the train station in a car park, which ended up being pretty expensive for the full day we were there (about €55, which isn’t too bad split between 4).

We arrived in Amsterdam quite late and it took us a while to find our accommodation in the freezing cold. Our friend was amazing and booked us a room on a house boat for the night. Our boat was just outside the NEMO Science Museum and it was great! There were four of us so we had to squeeze into two singles but it was fun for the night! Once we’d checked in we dumped our things and went into Amsterdam.

This was my first time in Amsterdam and I had no idea what to expect! It was pretty busy in the centre as we made our way to the red light district. I was amazed when we arrived because it wasn’t what I expected! I’m not sure what I thought it would be but it was different. There are obviously lots and lots of girls and I actually never realised that the girls can open their doors and invite you in after deciding on a price. I thought they’d have to go through someone else first but it’s good that they get to decide. It’s great that there are lots of rules regarding the girls, obviously no pictures and to treat them with respect. It was fascinating to see and I enjoyed it!

We also headed to a coffee shop, no clue which one but there are hundreds around Amsterdam to check out! For someone who doesn’t smoke, I thought it would be a bit grim to go and sit inside surrounded by it but the smell wasn’t bad at all in the ones we went in. Some of the places you can order food and bring it in with you, whereas others you can buy and smoke it in there. It was an interesting experience!

After this we headed back to the boat and to bed as we wanted to be up quite early to see Amsterdam in the day. The next morning was a bit grey but we got up and headed to Starbucks for breakfast. We headed into town and to the square with the Royal Palace and National Monument. What a beautiful square with stunning buildings surrounding. The buildings in Amsterdam were just the best, one of my favourite parts of the city. After that we wandered around a few of the shops down the different alleys, some of the independent shops were really cool!

We found somewhere for lunch, which I can’t remember the name of, but it was really nice! I liked sitting near the window and just watching the world go by. In Amsterdam be extra cautious about the bikes. I thought I’d be used to it because I watched for bikes all the time in Thailand but this is just another level! We were very cautious when crossing the roads!

Afterwards we walked to the Anne Frank House to try and get tickets but little did I know you had to book in advance! Next time we’ll have to remember that!

We then went to the Red Light Secrets Museum of Prostitution which was so interesting. You learn all about how it works in Amsterdam and the rules and regulations you need to abide by. I found it so fascinating and there was a section at the end with everyones confessions on and some are hilarious! It was a great tour and I learned a lot about the red light district.

After that we had to make our way back to the car to go home. It took us another 3 hours home and we just chilled the rest of the night.

Even though we only spent a day in Amsterdam I fell in love with the city, like many do! The buildings were just rich with history and the canals were so pretty. Literally everywhere you turned was picturesque and photogenic. If you’ve never been before I highly suggest going and I can’t wait to go back! 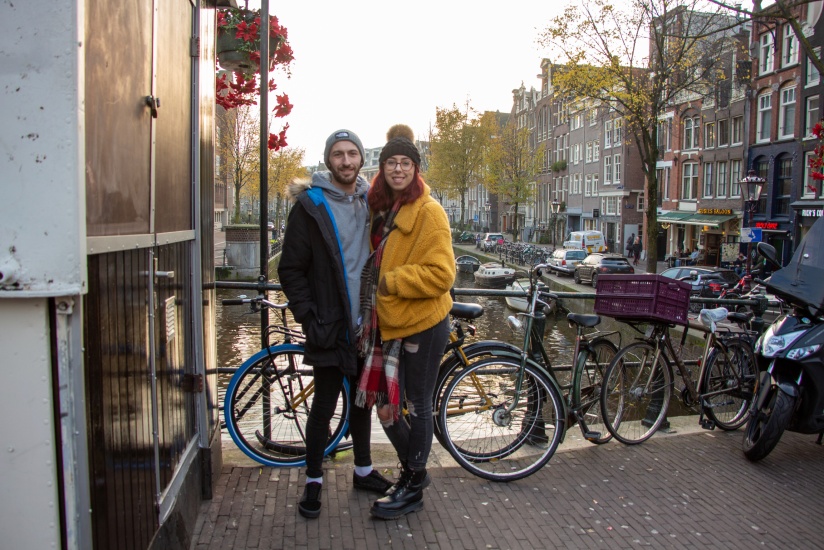 Don’t forget to check out my latest blog post! – 2 Night Stay in Penrith

5 thoughts on “1 Day in Amsterdam”

Last picture of my favourite castle cause we’re off to see another one tomorrow! We’re getting the train to Edinburgh and I’m beyoooond excited! . . We’ve starred so many places that we want to visit but only have two days! I hope we can squeeze them all in! Already booked a Harry Potter escape room and potions making class (cocktails!) . . If anyone has any recommendations for Edinburgh I’d really appreciate it! Bars, cafes or attractions would be greatly appreciated! 👍🏻 . . I’ve also got a new blog post in my bio about a mix and match clothing challenge with only 20 items! 👗👚👖 . . #flashesofdelight #ambtravelbug #iamtraveler #edinburgh #edinburghrecommendations #travelengland #discoverunder1k #travelinbetween #exploreedinburgh #thetraveltribe #wandertheworld #castlephotography #castlemypassion #castles_oftheworld #castlesofinstagram #castlesoftheworld #digitalnomad #castles_aroundtheworld #lowthercastle #lowthercastleandgardens #dirtybootstravel #exploringscotland #travellingscotland #travellingengland
✨ Wanderlust ✨ I’ve been getting major itchy feet lately, I can’t wait to get on my next adventure! . . Something I never actually talk about on my blog and socials is my jobs and how I earn money! I didn’t think people were that interested but I’ve been giving advice to a few travellers recently so I thought I’d write a blog post about it! (Link in bio!) . . I have two different jobs, one is an Independent Travel Agent (hit me up if you want any holidays!) and I also teach English online! With my job teaching online I literally have the flexibility to teach anywhere in the world as long as I have a good internet connection! I’ve taught English from my laptop at a 5* resort in Thailand and from my friends house in Belgium! It gives me the chance to earn money whilst I’m travelling too meaning I could travel the world full-time! . . I know this job isn’t for everyone but it’s been a blessing for me because it’s given me amazing opportunities to travel whilst not losing out on any money! . . If you want any more info about how you can teach online, click the link in my bio where I explain it all! 📚 . . 📸- @haydendaintyxo #travelteacher #teacher #teachersofinstagram #teacherblog #eslteacher #eslteachers #onlineteacher #onlineteachers #teachandtravel #onlinejob #digitalnomad #travelandteach #eslonlineteacher #onlineclassroom #workandtravel #flashesofdelight #discoverunder1k #wandertheworld #exploretheworld #discovertheworld #dirtybootstravel #travelinbetween
♥️ Happy Valentines Day everyone! ♥️ I hope everyone’s had a great valentines, galentines, palentines and all the other alentines Day!! . . I would like to get a bit soppy by talking about this boy here. He came crashing into the chaos that was my life when I was least expecting it. He came on board and made me laugh when I was down. He put the pieces of me back together and made me feel myself again. He’s my biggest fan and supports me in every way possible! I love you princess 💕💕 . . I can’t wait to travel the world with you! ✈️🌎 . . #travelcoupleinspiration #valentinesday #lovehim #valentinesday2020 #traveltogether #travelcouplecommunity #coupletravelgoals #creativetravelcouples #coupletraveldiary #inspiredtravelcouples #dirtybootstravel #appreciationpost #travellingtheworld #traveladdict #travelphotography #travelinbetween #couplephotography #travelcoupleinspo #thetraveltribe
Swinging through the week 💃🏻 Little throwback to our trip to Penrith! On the way we stopped off at Lowther Castle & Gardens in the freezing cold! ❄️ But I’m glad we did! We got pretty much the whole place to ourselves and managed to bag some cool pictures! The castle is one of my favourite things I’ve seen so far this year! . I’d better get used to taking pictures in the freezing cold because we’re off to Edinburgh next week for a few days and I’ve heard it’s even nippier than here! . If anyone has any Edinburgh recommendations I’d love to hear them! . #traveltogether #wandertheworld #thetraveltribe #dirtybootstravel #forbesttravelguide #iamtraveler #abmtravelbug #flashesofdelight #lowthercastle #discoverunder1k #travelengland #uktravel #travellinguk #penrith #lakedistrict #travelblogger #travelinbetween #castlephotography #digitalnomadlife #thetravellerspage #travelagent #sheisnotlost #travelphotography
Together is our favourite place to be ♥️ . We attempted the cute couple kissing shot! It’s definitely harder than it looks and we got lots of bloopers and fails in between! I think we need more practice in couple shoots but practice makes perfect! . . I also just published one of my favourite blog posts I’ve ever written! Check out the link in my bio for 7 Romantic Cities in Europe for Valentine’s Day! It took me a long time to find flights, hotels and things to do for you guys so take a look! ♥️ . . . . . . #tattonpark #tattonparkgardens #travelcoupleinspiration #globalwanderer #exploretogether #travelcouplevibes #travelcoupleinspo #coupletravelgoals #discoverunder1k #travelengland #flashesofdelight #wandertheworld #coupletraveller #travellustcouples #valentinesdayblog #europeancities #romanticcity #dirtybootstravel #travelblogger #couplephotography #travelinbetween #thetravellerspage
💫Fresh Air💫 I definitely need to start doing more walks if they end up like this! . We took an impromptu trip to Tatton Park this week and were treated to views like this! The whole place was empty (probably because it was freezing!) but that didn’t deter us! We wandered around the cute farm shop, strolled through woods and found ourselves some fallow deer! . It’s so nice to walk in the fresh air with the one you love, chatting and laughing. It’s becoming my favourite thing to do and it needs to be done a lot more this year! . . Where is your favourite place to have a walk? . . Also can we talk about this amazing picture that @haydendaintyxo captured 😍😍 . . #flashesofdelight #abmtravelbug #iamtraveler #forbestravelguide #travelengland #discoverunder1k #uktravel #travelblogger #travelinbetween #thetravellerspage #dirtybootstravel #journeysofgirls #girlsdreamtravel #tatton #tattonpark #tattonparkgardens #abm #thetraveltribe #exploretogether #globalwanderer #wandertheworld #travelblogger #wordpressblogger
%d bloggers like this: